Out of the blue, I am talking to Aaron on the phone from Germany and he asks what I’m doing this weekend. I let him know that I’m off work Friday to do house-hunting and then off the weekend. So…..

After much discussion (well, not really that much), we decided to meet in Belgium! Brussels to be more exact…..

Early Friday morning, off I headed a mere 18 hours after getting behind the wheel in Germany and headed off down the autobahn towards Belgium! It was a smooth ride (if you forget about the fact that I haven’t driven a standard in a really long time), although a bit long. I got stuck in traffic coming into Brussels. I ended up at the airport nearly an hour late.

As I walked through the ‘arrivals’ area, I didn’t see Aaron. On my way back through, Aaron nearly walked into me as he was walking out of the little shopette. I nearly cried when I saw him. I hadn’t realized how much I really missed home. It was wonderful to see a familiar face. Thanks Aaron for bringing me a piece of home. 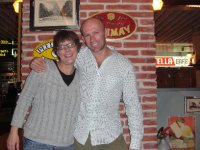 We drove around Brussels trying to find out way to the Grand-Place for what seemed like forever. We thought we had the right place and parked and found out that we weren’t at the right place so decided to have lunch because we were both starving. Lunch was at a cute little French Bistro tucked into one of the many little side streets. The cutest thing was that the bathroom was HALF-Way up a spiral staircase. The waiter had to show you how to get to it for fear that you would walk right past. I have to wonder how many people walked up then down then back up without finding the WC (bathroom/water closet), before they decided to start showing patrons the way!

When we found the Grand-Place….it was breathtaking. It’s a beautiful square with amazing architecture all around. And then, to top off the feast for the eyes, we were treated to HUGS!!! 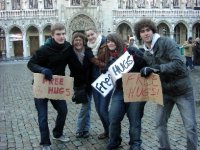 We window shopped and of course, I had to stop for a bite of Belgium chocolate! Can you say ‘wonderful’!

By this time, we were FREEZING. Poor Aaron, only brought a sweatshirt for a coat and even with my wool, scarf and mittens: I felt like a popsicle.

We found a charming café’ where we indulged in coffee and an authentic Belgium Waffle. We sat right next to the fire and were thawed in no time. 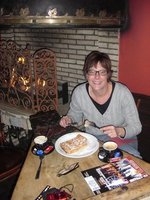 As we were leaving the square on our way back to the car to head to Brugges, we found a leather coat store. After about an hour of deliberating and trying on of several different ones, Aaron finally decided to buy! I think he looks quite handsome in his new coat….

We found Santa, doing a little Christmas shopping taking a much needed break right before the Christmas Eve rush... 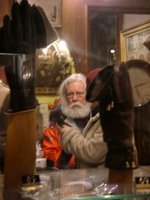 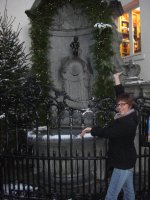 It was a short trip on the Autobahn (I’m feeling a lot more comfortable now, besides the little beater of mine will barely do 120kph), and we were in Brugges. It’s a very quaint little town. We found a cheap hostel to stay in for the night and although it isn’t 5-star by any means, hopefully it will allow us to get some much needed sleep. Especially Aaron…I don’t know how many hours he has been awake but I think he is starting to hallucinate now (not really).

I’m headed to bed now so will fill in the rest after we return back to Landstuhl tomorrow evening.

Posted by Khandilee 03:06 Archived in Belgium

Previous Next Table of contents

I am soooo jealous!!

Oh, you are bringing back many good memories! It was just a couple of years ago that I was in Brussels, Brugges, Amsterdam, and Luxemburg. I bought tapestry and lace in Luxemburg and tons of chocolate in Belgium. Brugges was delightful, and we took the boat tour through the canals of "little Venice". It is such a picturesque town and much nicer than the movie "In Brugges" would leave you to believe! There are some lovely forests surrounding Luxemburg, great for hiking! And Brussels is the seat of European government where many important international decisions are made, right? The square in Luxemburg and Brussels is truly gorgeous with bell towers and gold ornate appointments. The Mannequin Pis is such a tourist trap and the little boy is quite tiny, isn't he? Everybody has to get a shot of the little penis squirting water LOL.
Enjoy!
Pam

OK...so now I am REALLY jealous. I hope to see that part of the world. but its going to be awhile. You have lots of fun and I will viacariously through you for now. Be Safe!

Hi khandi! The pictures are awesome. Do you feel settled. I hope you like your job. Have you seen Trinity's new haircut it is so cute. I just seen your mom at DQ Thursday. Talk to you soon.

Comments on this blog entry are now closed to non-Travellerspoint members. You can still leave a comment if you are a member of Travellerspoint.

If you aren't a member of Travellerspoint yet, you can join for free.